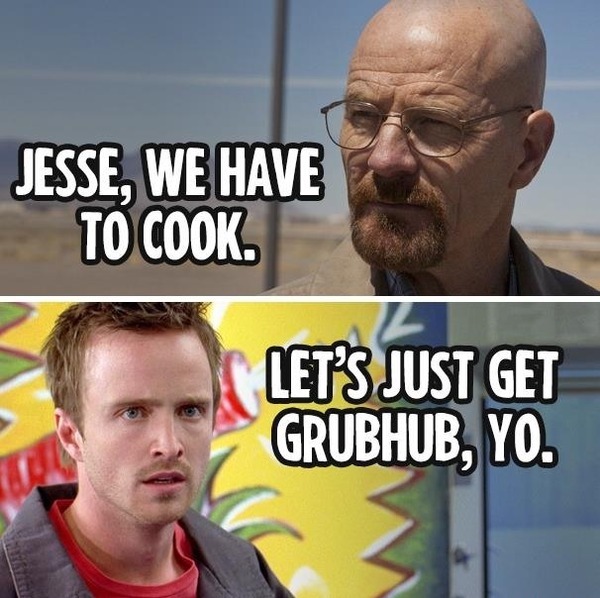 “Build a moat around your business.”

Every start-up business advisor ever

GrubHub’s primary business is enabling online food-delivery for restaurants in North America. At the end of 2018 it will have about 280 active markets and somewhere between 16.5M and 17.5M monthly active users, or “active diners.” GrubHub earns money by taking a commission from restaurants on orders placed through its platform. In exchange it provides customers with online ordering and payment, as well as delivery of the food through its network of drivers who are independent contractors.

Today, there are numerous private up-start competitors who compete directly or indirectly for consumer dollars delivering either pre-prepared meals or meal preparation kits. Additionally, large players in the consumer goods and services space have taken interest in the online food-delivery market. Competition is driving down margins and driving up the cost of user-acquisition for GrubHub.

GrubHub, like other online food-ordering services, benefits the most from partnerships with large restaurateurs’ such as Yum Brands. However, it appears that GrubHub has fallen out of favor in recent times with both its existing and potential partners.

GrubHub has recently reported that it will increase sales and marketing spendas competition continues its drag on margins and cost-of-user-acquisition. If this additional spend does not yield a meaningful increase in user acquisitions, it’s safe to say GrubHub’s ability to grow quickly enough to justify its valuation maybe under pressure.

GrubHub maybe an acquisition target in a crowded space, but I have a hard-time identifying potential acquirers given the ubiquity of “like” companies with similar technology and far lower valuations.

Finally, looking at the quantitative price action in the stock. Since GrubHub’s debut in 2014 at $26 a share, it has traded between $18.50 AND $148.35 A SHARE, and while 4-years is only a short period of time there are some interesting patterns emerging in its price action.

I don’t have enough fingers and toes to list GrubHub’s competitors so let’s start a list off the top of my head: Delivery.com, Munchery, Caviar, DoorDash, Postmates, Bite Squad, HelloFresh, Home Chef (the last two are “Home Meal Kit Delivery” options, which I tend to consider as proximity competitors).

Even if you’ve heard of half of the names on that short list (all I had to do was google “Food Delivery Service”), I’d be remiss to assume for every one of them there are 10 more operating in their own market-segments or niches. More warring factions than a Game of Thrones episode.

Also notice, that list doesn’t include the two competitors I consider to be the most dangerous: UberEats and Amazon Restaurants. Neither of whom can be dismissed as anything less than steam rollers when it comes to business segments/regions they enter. Both are well known users of a “blitzkreig” technique of entering business segments/ regions and using their seemingly bottomless investor dollars to win market share and starve out competition.

I witnessed this firsthand, while living in San Francisco in 2015, when Amazon laid waste to upstart home grocery delivery service Instacart, with “Prime Now” and “Amazon Fresh”. It’s also worth noting that Amazon Prime has 100 million plus members whom are all receiving discount coupons for various Amazon ancillary services (like Prime Restaurants) in exchange for waiting a bit longer to receive their prime orders.

Likewise, UberEat’s portion of Uber’s sure-to-be colossal 2019 IPO certainly cannot be underestimated. As a private company, our understanding of Uber’s business segments and their contributions to its overall market valuation and revenues are relatively opaque. Though we’ve had a few peeks, for example, Uber CEO Dara Khosrowshahi mentioned in May of 2018, that the food delivery service (UberEats) already has a $6 billion run-rate and is growing at 200 percent. As the article rightly points out, that number by itself eclipses GrubHub at $3.8 billion in annual food sales.

Cost of Sales and Marketing/Partnerships

GrubHub’s Q3 ’18 conference call was dominated by talk of how much spending the company will have to do going forward to maintain market share. The company state during this conference call that it planned to increase its incremental marketing spend by between $10-$20 million. Taking the middle of that range ($15M) this is about a 31.5% increase over the average quarterly spending in the proceeding 4 quarters ($47.8M). This spend shows up in their EBITA Guidance for Q4 ’18, which they cut to $40-$50 million from $72 million. At the high-end this is a ~31% haircut, and this is during the winter months which are “traditionally their strongest quarter.”

Organic user growth is the best kind in my opinion, because it comes for free, and the best way for GrubHub to grow organically is through partnerships with restaurant chains (such as it’s relationship with Yum Brands) but this may not be going so well either:

We are also planning for an increased investment in marketing during the fourth quarter. We believe this is a great time to increase spend for a number of reasons. First, we have been slowly increasing our spend all year, and it’s actually increasing effectiveness as we’ve spent more. Second, our restaurant network is better than ever, due to the Grubhub launch markets and adding thousands of Taco Bells and KFCs. Third, our product has improved dramatically over the past few years. And finally, the fourth quarter is typically our strongest for new diner acquisition because of weather and school schedules.

I’ve bolded the “Taco Bells and KFCs” reference above because it’s notable, in my opinion, that Yum Brand’s second largest business Pizza Hut recently announced their acquisition of QuickOrder, despite their 3% ownership in GrubHub. Now, it might be worth considering that the Pizza space is much more technologically competitive than Fried Chicken (KFC) or Mexican (Taco Bell though “Mexican” is being generous), with notoriously tech savvy Dominoes. Then again, Pizza Hut has always been conspicuous absent from the Yum Brands partnership.

This still begs the question though: Why would Yum Brands pass over GrubHub? Could it be that they feel that an additional investment is over-priced at the current share price?

Speaking of partnerships, Starbucks announced in recent weeks that it had chosen UberEats as its primary distribution partner. Imagine the kind of free exposure an UberEats sticker in 2,000 Starbucks across the U.S. will garner.

Next, let’s look at GrubHub’s future potential for growth. Technology companies command their nose-bleed P/Es because of the “digital potential” (relative capital investment’s return (ROI) on investment for digital goods/services vs. investing a dollar in a business that has fixed margins per dollar of revenue). Technology companies should be able to drive down their margins through digital potential, economies of scale, network effects, et al. However, with GrubHub, in my opinion, there is nothing truly uncopyable about GrubHub’s business model. So it’s no wonder there are hordes of online delivery services in the two most populous nations in the world: China and India.

So, broader-market conditions aside, it begs the question how could this company justify a P/E ratio of 100+ during parts of 2018? We’re back down into the mid-50’s presently, and even this seems inflated when taken against the NASDAQ 100’S P/E OF ~18.3.

The 1y-Forward P/E vs. the current P/E is higher for GrubHub than it is for the Nasdaq-100, an indicator to me that the shares maybe mis-priced relative to potential future growth even for a single stock.

On a side note, GrubHub’s inflated P/E was how I became interested in the GrubHub trade in September 2018, as I felt cyclically some high-flying Nasdaq technology stocks were in for some P/E compression in the latter half of 2018.

(Hint: Look at October, November, and December 2018 and you can assume how I did.)

How do we know if my theory is valid?

So far I’ve mostly speculated about GrubHub’s potential market woes, so to put it in some relief, a number I would be watching to further validate my theories about GrubHub’s competition and spend would be “active diners,” a number that grew ~67% YoY for Q3 ’18, to 16.4M.

While these numbers are skewed higher due to the acquisition of “Eat24” from Yelp in 2017, and recognizing its contribution to the overall user-base count of active diners (4M) in Q4 ’17, the general consensus I am watching for is the net effect of the $10-$20M increase in sales and marketing spend on growth of the GrubHub “Active Diners” count in Q4 ’18.

Excluding the Eat24 bump, over the last year, GrubHub spent an average of $47.3M per quarter on advertising to gain an average of 675K users. If they are increasing their advertising spend by $15M (split the guidance) or ~31% in Q4 ’18, I would expect that they should obtain at least 31% more users or around ~884K, adding to a total of 17.28M. Any number less than this and I believe my theory would be validated.

Technology companies grow by acquisitions, and they are definitely the short seller’s kryptonite. I’d be remiss if I didn’t at least consider who might be in the market for GrubHub at this point and who could swallow a roughly $8 billion price-tag plus premium.

Analysts have pointed to the possibility of Amazon acquiring GrubHub before, a little over a year-and-a-half ago a Wedbush Securities analyst, Aaron Turner suggested Amazon might want to buy GrubHub to augment its restaurant delivery business.

The next most obvious is their existing partner Yum Brands, though I’m less confident that they are eyeing a meal of GrubHub’s size given the recent Pizza Hut-Quick Order tie up.

Are there other technology companies who want access to the online delivery space? Lyft and Uber seem to have a “me too” thing going on (not #metoo – well, maybe Uber … but that’s beside the point), so I’d be cognizant of this, though I doubt we’d see anything until after the impending Lyft IPO (circa early Q2 ’19)?

Google has more or less let Google Express drift aloft like the balloon or parachute that is its logo. It strikes me that they have bigger concerns with Amazon’s purported entry into the pay-per-click advertising space than with Amazon Restaurants. Google Express may see its days numbered like so many other failed Google experiments.

In the latter quarter of 2018, we saw the stock make a precipitous retrace from its all time high (September ’18) to the end of 2018, the stock fell almost 50%. At which point the price has rebounded since nearly touching its 52-week low.

Along with the broader market, I expect the price to rebound off support here before continuing lower based on the factors I have identified above. The next major fibonacci support appears to be around $48.

Source: Trading View (My own annotations)

Thanks for reading – I would appreciate everyone’s feedback (or UberEats restaurant tips)!

Disclosure: I am/we are short GRUB. I wrote this article myself, and it expresses my own opinions. I am not receiving compensation for it. I have no business relationship with any company whose stock is mentioned in this article.